Issue 174 of The Dolls’ House magazine has been on the shelves for a little while now, and it features the second installment of the murder mystery I mentioned a couple of posts ago!
The second part required the highlighting of more details from the text, so I opted for a scary needle, a bottle of evil poison and an LAPD badge (which, if you have a look in the magazine itself, was very detailed). It was necessary for me to look very closely at the detail on an LAPD crest and I realised quickly that I had previously had no idea how much detail it contained. I recommend looking one up if you have a moment, they’re very interesting! 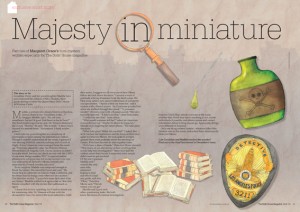 I’m thrilled to say that not only is there another part of the story to appear here soon but I have another commission to work on the the following issue! Very exciting. I adore editorial commissions in general, and this one is slightly different because I haven’t had a sneaky peek at the article it accompanies yet! So watch out for more news in a month or so.